For over 6 years, Admiral Insurance's recruitment website for their Halifax call center used an outdated and clunky version of the Joomla! content management system. The system was old and full of security holes. Every time they asked me to do updates to their site I would try to sell them on switching to Drupal. That day finally came when they realized that, by using Drupal, not only could I create a website that was more intuitive for the recruitment team to edit themselves, but I could also build into their website a new candidate management system. This allowed them to save thousands of dollars per month as they canceled their subscription to their previous candidate management system.

They wanted to ensure branding consistency, therefore, an entirely new site design was out of the question. I recreated the Joomla! site's design and upgraded it to use HTML4 and a newer version of CSS for design elements, that were previously just an image in a table. Other improvements to the site included the homepage hero slideshow, which under Joomla! was only editable by an Adobe Flash developer.

Through close collaboration with the recruitment team itself. I created an applicant intake and tracking system which handled at least 10 thousand applicants per year. It used Drupal's Workflow and Rules modules to arrange and push applicants through the application process, with regular input from the recruitment team. Recruiters would screen applicants and use the system to mark them ready for the next step in the recruitment process, until the very end, where the site would populate information about the successful applicants into an Excel spreadsheet that their payroll system would parse into employee records.

This applicant system was in use for at least three years, until a directive from their head office in the United Kingdom required them to switch to the applicant tracking system which the rest of the company uses for data sharing purposes.

Please note: A full demonstration of the applicant management portion of the tracking system is currently unavailable, as the active system currently contains the private information of those recruited.

Note: This website is no longer on the internet. 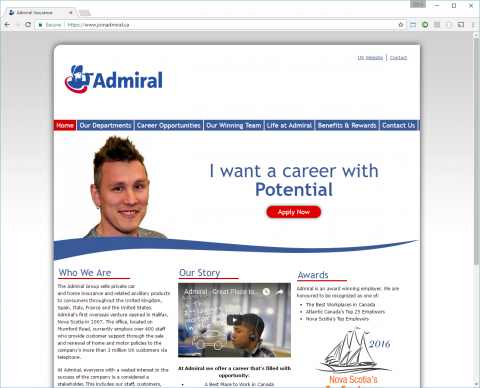