Prior to the summer of 2016, the Bella Rose Arts Centre had two separate networks with two separate public IP addresses ported without interference through the Halifax Regional School Board network to the internet. The school board, while tightening up the security of their own network decided that it was unsafe to have a third party entity using their network. As a result, the theatre's network topology had to be redesigned so that it could share a single internet connection with a dynamic IP address across three separate networks. The three networks were necessary to ensure the theatre's own network security, protecting office operations, technical operations and the guest network from each other and allocating bandwidth as appropriate. In order to reduce the amount of equipment needed, the existing routers, running DD-WRT, were reconfigured to use VLANs which shared a single internet connection but were not allowed to communicate specifically with one another. I created network topology diagrams to help keep track of it all.

To resolve the issue of remote access to the network, I used my Dynamic DNS script that I wrote for Vesta Control Panel and installed it on a Raspberry Pi on the network. 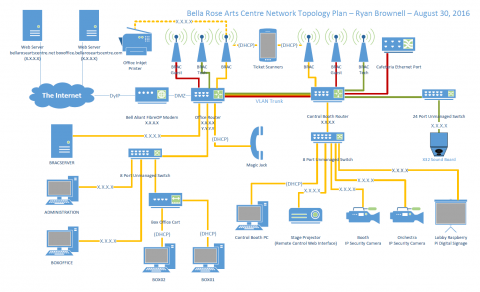